…Pete playing with his band from high school…

Apparently for some time now a rock station in Oklahoma City has been sponsoring a “March BANDness” contest that runs at the same time as the NCAAs March Madness basketball tournament. They start out with 32 local bands, the radio station gives their songs airplay, people vote on the station web site for the song they like best, and the winning bands get to advance to the next round. The top four get to duke it out at a local amusement park in a “battle of the bands” for big prizes.

Most that advance are local bands that are playing in clubs every night and already have followings, but one group that is advancing is a band made up of college sophomores. Its my youngest sons band, North Rock. They have just made it into the elite 8.

Doug, Don… can ya help a brother out and vote for Pete’s band? Go to this web page. You will see the North Rock song on the list. In order to vote you have to go to the bottom of this list and register. On another screen you have to fill out an information field. (you only need to fill in the parts with the *s and I would also uncheck the boxes at the bottom where they want to send you stuff) Once you are registered, go back to the March Bandness page and VOTE NORTH ROCK! You will receive an email that will have a link on it. Clicking on the link registers your vote.

This is all happening very quickly. I think March Madness will be over this week and so will this contest… please vote now!

If we could just get all us Joness voting for Pete that just might be enough to put him over the top… but if a whole bunch of non-Joness could give us a hand on this thing, that would sure be nice…

You can hear their song HERE.

One vote one voice one winner great song. Peter be sure and smash a guitar or something along those lines for stage effect. People like that sort of stuff.

I dunno… it’s really hard to not vote for something called “Bleeding Out Loud” or “The Donny Vomit Theme Song”…. well, OK, I’ll vote for Pete so I can bask in the glow of a job well done…

The coolest part about the deal is hearing Pete’s song on the radio as I drive around OKC… pretty crazy.

…does everybody go crazy when his song comes on the radio like they do in the movie, “That Thing You Do”? …I sure hope so…

…Pete, I think if you would change your bands name to Cap’n Pete and the North Rock Shooters you just might win this thing…

If you mention Texas in any tunes you have my vote.. Even though you don’t live in the United State Of Texas any more..How are things at our nothern border??

Hey… I’m checking in from an airport… somewhere… I think Chicago… anyway, I just wanted you all to know Pete’s band made the final cut and gets to move on to the final four, big battle of the bands next Saturday!

ALRIGHT!! NORTh is the cinderella of the band battle… a cinderella story 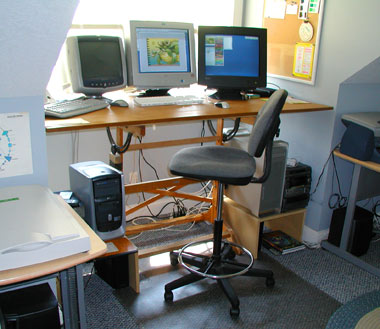 Recently, I was in Oklahoma City visiting my two boys. One night my oldest son took me to see his new workplace. I walked into his studio, walked straight to his computer area, leaned onto his waist high work table and said, “this is great!”

Nick said when they moved into their new area all the designers wanted high tables to work on so they could stand as they worked if they wanted to. He said you feel pretty crummy when you sit low in a chair in front of a computer screen all day. With a high table you can sit if you want or stand if you want.

As soon as I got home and bought a sheet of MDF and immediately raised my computer workspace to waist level. I cannot explain how much better working at an elevated height is.

Nothing like raising the level of ones work, eh?

Reminds me of that Stevie Wonder/Paul McCartney song… “Ebony and Ivory”. It is good to see PC and Mac coexisting on the table together. …warms the cockles of my heart

This is also a great vantage point for spying on anyone coming up your driveway… It’s sort of an air-traffic controller deal.

…nice to see you back, Don… Doug and I pretty much brought Brother Jones to a screeching halt last week without ya…

Don’t blame yourselves… blame the terrorists. They are infiltrating everywhere. No wonder you’re keeping a watchful eye out your window. I see in the paper that you guys are enjoying a outbreak of E-Coli up in Indiana. Watch that bagged spinach on your salads.

Your desk is almost like a transformer! Cool. I think it’s kinda interesting that you have the newer G5 machine while Doug has the newer flat panel monitor. Actually now I see that you have three monitors? Mac, PC and Linux? Wow. You must be a super user or sumthin’.

It looks like you have room on your desk for a Mr. Coffee maker. Hang a few mugs on your bulletin board.