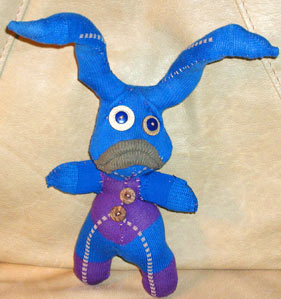 Skeeter Jones joined the Mutant Sock Monkey Covert Operations Unit late last night. Skeeter is a huge St. Louis Cardinals fan and was quite unhappy with the outcome of last evenings playoff game (as you can see from the picture).

I like that cool vest with matching sox… I would think Skeeter would be a big fan of the Blue Sox. I like their cheer…. “argyles will sock ‘em”

We watched the Wallace and Gromit movie this weekend… really fun! You need to see this on the big screen. I think Skeeter must be from the movie… there were rabbits everywhere, and the lady had these LIPS. Skeeter has the SAME lips… hmmm…..

…with your host, Dennis Jones…

To recap yesterdays exciting episode; …I am trying to create a poster that has an “old time” look to it. My client is not aware of what I am trying to accomplish with color and has sent an additional email asking that the poster be very, very colorful. Unfortunately, I have already finished painting it using very limited color.

As I look at the poster, I really don’t really see any way to insert a lot of color into it. Boots, footballs, and anvils just aren’t very colorful items. My only option is to blow out the background with color. This is a tricky proposition. If too much is going on with the background it will overwhelm the images in the foreground. I keep piddling around with color until I come up with a solution (pictured above). I feel that, short of painting Skittles and a rainbow into the background, this is about as much color as I will be able to insert into this.

I burn the job to a disc and toss it in the mail. This didn’t turn out exactly the way I conceived it, but hopefully it will be what the client is looking for. I receive an email a day or two later saying, “hey, we sure liked that colorful poster” …whew!

I was up all night worried that this project was going to crash and burn. But now life is just peachie again … Dennis does another high-flyin’ tightrope illustration and the Card WON last night!!

…Card? ..Cards… Cardinals? Did the Cardinals win last night? …Don, talking to you is just like talking to Lassie…

That’s quite the movie transition. You started out with Star Wars and ended up with Lassie.

…yes, Dan, it’s amazing where you can end up when you have no real game plan for anything that you are doing… Brother Jones is a testimony to that philosophy…

so… where are the dinosaurs?

…well, in this episode the dinosaurs pretty much just hid in the trees and growled real loud to try to scare the plein air painters on the beach… I don’t think anyone actually saw one…

Upon further study I have detected the music you were listening to while producing this fine piece of poster art. The color enhanced letters CCR can mean only one thing: Credence Clearwater Revival! ” I see a bad moon arising”

…yes, Don, you have discovered the secret evil backward masking I have inserted unknowingly into this poster… only it’s not backward… or masked very well… and I didn’t even know I did it… this is all very scary stuff…

If I had a pair of those pants I would be a happy man.

A big Ohio hello to the Jones boys, from a first cousin. I enjoy your artwork now, just like when we were kids. Remember blowing off firecrackers in the old school yard? And I miss my “annual professional haircut” from Uncle Loyd. I remember it all… love to your mom. Bruce Jones

Cuzin Bruce! Woo! Yep… those were the good old days! I always enjoyed your annual visits… and always cried when you had to go…. sigh….

BAAAA-ROOOCE!!! Always a high-point when Jones cousins check in on this mind-numbin’ site. I remember y’all blowing into town from Virginia and Uncle Alton was always sporting the coolest sunglasses. I now wish I had enough hair for a haircut.

It takes a BRAVE person to come out and admit that they are related to us. Think we should offer Cuz an honorary membership? If I remember correctly… it was from Bruce’s family that I first heard that phrase… “the Jones Appeal”

Oh, I actually thinks it’s much, much BRAVER to marry into the Jones clan! But I’ve never regretted it…well, except for that one time, when a picture of me in a Batman mask was posted on Don’s section of this site… Which reminds me: Halloween (er—make that Harvest Festival time) is almost upon us. Sure hope my son doesn’t ask me to dress up as the Caped Crusader again this year…

but you look so GOOD in tights!

…I’m kinda uncomfortable with the direction these comments are headed in… I think we better fire up some manly football talk… arr, arr, arr…

Thanks so much for posting this little series. It’s encouraging to know that even a big-name illustrator like Dennis Jones occassionally runs into problems. You handled it very well. I can tell you are a “big name” illustrator because the finest illustrations always include either a frog, a bicycle, or an anvil. You included all three! Even Rockwell never achieved such a feat.